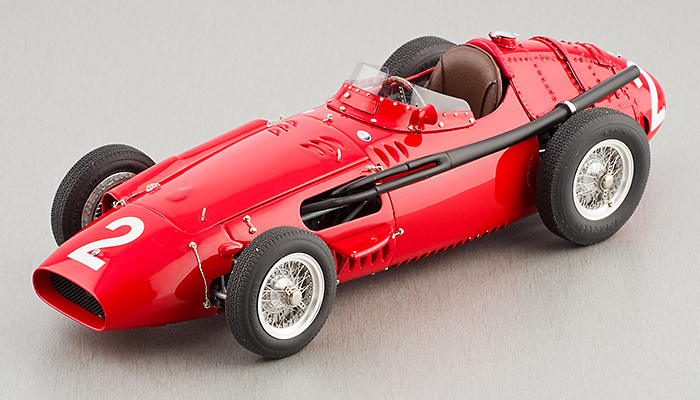 The Maserati 250 F was not only one of the best Formula 1 race cars in history, but also the most long-lasting one by far. First released in 1954, the 250 F was meant to cater to private race teams. But it turned out to be the only car that had participated in every single race during the 2.5 litre era from 1954 to November 1960. As a result, the Maserati 250 F competed in a total of 247 GP races, an all-time high in Formula 1 history.

This CMC scale auto with starting number 2 is a replica of the very car that J.M. Fangio drove to victory on July 7, 1957 at the French GP. It is released as a limited edition of 2,000 pieces worldwide.

For the 1957 Formula One season, Maserati developed a new light-weight space frame from thin steel tubes. The exhaust pipes were also redesigned so that they went over the left side of the wind screen to the rear end, where they conjoined into one single pipe. In addition, the drum brakes were optimized and given a more polished final touch.

With these improvements, the car received the type designation “light weight.” This move proved to be very successful, as Fangio drove the new 250 F to his 5th Formula One World Championship that year.

The French GP that took place on July 7th, 1957 in Rouen was one of the best GPs in Fangio’s long career. The treacherous 6.5 km-long track, with its fast curves and sloping twists, was just made for driving virtuosos like Fangio. As he passed the finish-line in his 250 F with starting number two, he was virtually 50 seconds ahead of the driver in second place. The bulge in the nose cone of Fangio’s car stood witness to the hard battles he had fought for each single position against his competitors. Luigi Musso finished 2nd in his Ferrari Tipo 801, whereas Collins and Hawthorn won the 3rd and 4th places, each driving a Lancia-Ferrari.

An anecdote for your information: Fangio’s teammate Jean Behra was about to cross the finish line in sixth place, when his 250 F fizzled and stopped short. Undaunted, he pushed the car over the finish line. By so doing, he was able to finish sixth against the odds.