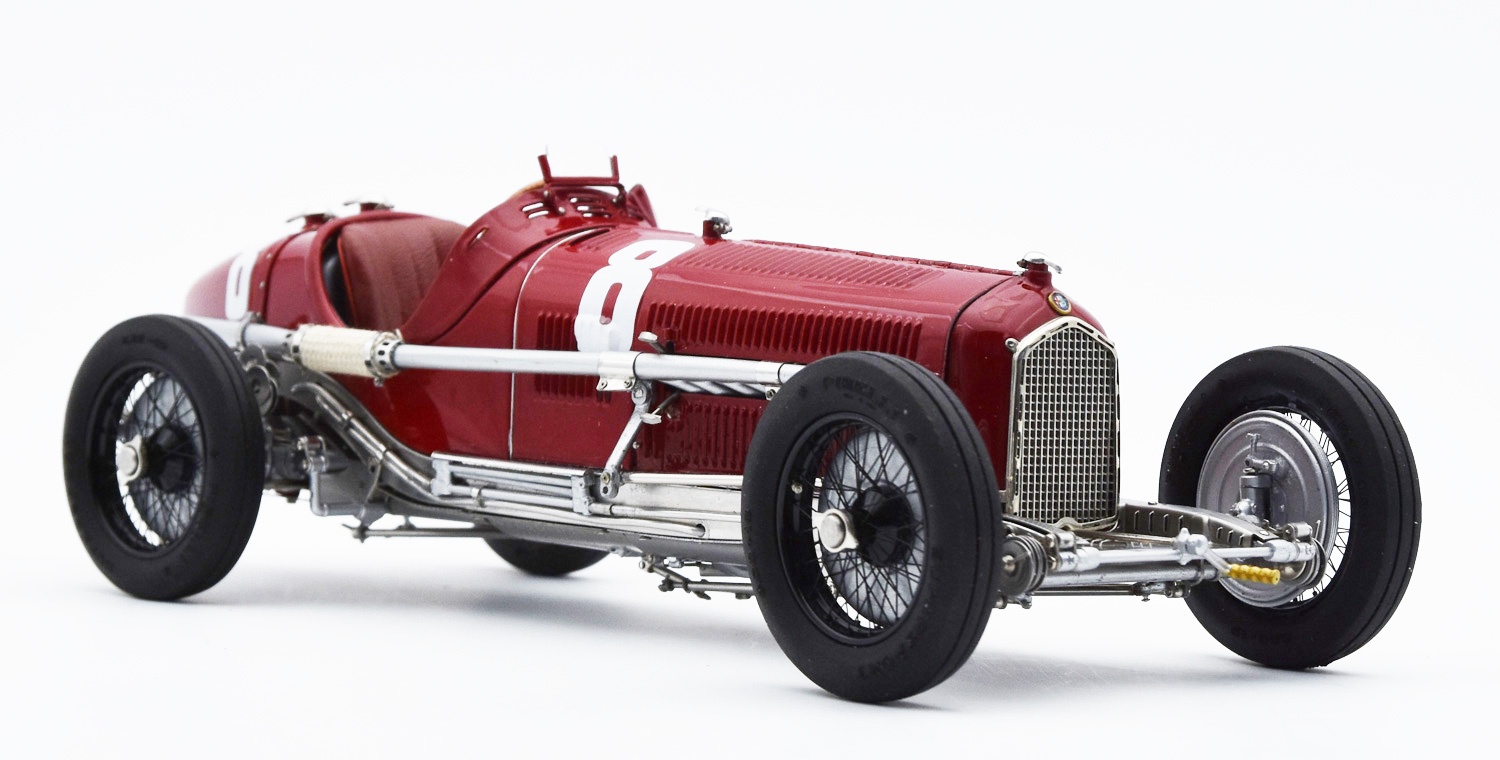 The Alfa Romeo Tipo B was the most successful single-seater Grand Prix racing car of its time. Alfa Romeo built and raced it between 1932 and 1936. Initially as a factory race car for Alfa Romeo, then later under the Scuderia Ferrari label after having taken over Alfa Romeos racing activities. The car, designed by the legendary engineer Vittorio Jano, was based on the equally legendary Alfa Romeo 8C models. The P3 was Alfa Romeos second single-seater after the Tipo-A monoposto of 1931.

This product is currently not available, but you can pre-order it here. When the product will become available, we will inform you by e-mail and you have to make the payment only then.
Request for item via Email or telephone: (852) 2186 9020
Item no. M-219 Categories: All-Products, CMC Alfa Romeo, Models 1:18

The 10th Gran Prix Italy was part of the 1932 European Championship. Fifteen of the best European drivers took part in it, and the contest occured primarily between Nuvolari in a new lightweight 2.65-liter Alfa Romeo Tipo B and Fagioli in the 16-cylinder Maserati. Frequent position changes made this race very exciting to watch while all records were broken in the process of it. Among the main contenders were Chiron and Varzi competing for Bugattis, Nuvolari, Campari, Borzacchini and Caracciola racing for Alfa Romeo, and Fagioli contending for Maserati. Eventually Alfa Romeo proved to be superior and won.
On June 5, 1932 the 10th Grand Prix of Italy took place on the famous 10-km Autodromo di Monza (4.5 km high-speed oval track plus the 5.5 km asphalt circuit). Together with the Grands Prix of France and Germany, it would count toward the European Championship, and all three events were to be run to the same 5-Hour formula. Cars could participate without restrictions on weight or engine capacity.
Single-seat race cars were now allowed, and Societá Anonima Alfa Romeo debuted their 8-cylinder 2650 cc monopostos (P3s). Tazio Nuvolari and Giuseppe Campari were made to drive these brand new single seaters, whereas Mario Umberto Borzacchini and Rudolf Caracciola were assigned to pilot the older 8-cylinder 2300 cc Monzas. Bugatti fielded its most established drivers, Louis Chiron and Achille Varzi in two of its 5-liter models, which had shown their incredible speed at the Avusrennen. Officine A. Maserati was the third works team that participated in the race, and it entered Luigi Fagioli in the bulky 16-cylinder 5-liter Maserati.

In addition to the three works teams, there were quite a few of independent entries, including Hans Stuck with his Mercedes, the capable Bugatti drivers René Dreyfus, Marcel Lehoux, Jean-Pierre Wimille, Emilio Romano and Guglielmo Peri, Clemente Biondetti with his special M.B. car and the Scuderia Ferrari representatives Pietro Ghersi and Eugenio Siena in two Alfa Romeo 2300 cc Monzas , and so on.
The race was set to start at 9:30 am and end at 2:30 pm. Estimated attendance ranged from over 50,000 to 100,000. Fifteen of the confirmed entries showed up on the starting grid. As the checkered flag was lowered at 9:42 AM, the cars took off with a thunderous wail of superchargers and a dense bluish cloud of smoke.
After 3m34s, Nuvolari in the Alfa Romeo Tipo B finished the first lap ahead of Chiron in the big light blue Bugatti and Campari in the second slim Tipo B P3. Going into lap two, Nuvolari was still in the lead, followed by Campari and Chiron. On the third round, however, Chiron set up a new record lap in 3m24s at 176.125 km/h.

The battle for the lead was fierce, and it kept changing hands. After 10 laps Fagioli took the lead in his Maserati ahead of Nuvolari, Varzi and Chironi. Fagioli felt at home on the Monza circuit and held on to his lead for many laps. Even Nuvolari’s repeated attempts to surpass the 16-cylinder Maserati were of no avail. In The Autocar W. F. Bradley described the situation: “The race was very thrilling. At intervals of less than two minutes the leaders would flash by, either on the inner or outer of the two parallel tracks, at 140 miles per hour, sometimes side by side, until one wondered who would give way on the bends, but never separated by more than a few lengths.”

After 20 rounds Fagioli maintained his lead. On lap 23, however, he had to change tires and refuel, which took 3m7s and caused him to fall to eighth. In the meantime Nuvolari regained the lead, but it was short-lived and ended with a stop for new tires and refueling that took 1m36s. After 26 laps the order was Varzi, Chiron, Nuvolari, Campari, and Dreyfus.

The heavy 5-liter Bugattis that Varzi and Chiron drove appeared to be a winner on the straights, but in the curves the Alfa Tipo B P3 was able to beat them hands down. After 30 laps Nuvolari was again in the lead. He and Campari remained in front with Fagioli in third place after 40 laps. By lap 45, Nuvolari had extended his lead over Campari from a scant 16 seconds to 1m11s.

In the wake of lap 50, Nuvolari had to make another pit-stop for new tires, fuel and service, and Fagioli moved ahead to take the lead. Without a question, the Maserati was the fastest car on the track. But on lap 61, Fagioli had to stop for new tires. This pit stop cost him 4m10s and the reasonable chance of winning the race. W. F. Bradley wrote in The Autocar: “He changed all four tyres, filled up with petrol, oil and water, rinsed his mouth and poured water liberally over his head, wavered for a few seconds, and then turned the car over to Ernesto Maserati, with a loss of 4 min. 15 sec.” Whether Ernesto Maserati in Fagioli’s car made up time against Nuvolari is nowhere reported.

On lap 71 Nuvolari was now one lap ahead of Dreyfus in second place. Fagioli found himself in fourth place and set off with great determination to make up for the lost time. The tenacious Italian managed to improve his lap time for seven laps in a row to regain second place. His record lap was three seconds faster than Nuvolari’s best in the Alfa Tipo B P3. Fagioli’s determined chase brought new life into the race. On lap 77 Fagioli passed Dreyfus and took the second place.

Upon completing 83 laps over five torturous hours, Nuvolari crossed the finish line in flying colors amidst the frantic cheers of spectators. Fagioli finished second about two and a half minutes later. With this victory Nuvolari estalished his position as the most successful driver of the 1932 season. For the third time within two months, the 40-year old Italian excelled in the hardest races at Monte Carlo, the Targa Florio and now Monza. For Alfa Romeo it was so great to win the first race with their brand new monoposto – Tipo B P3.