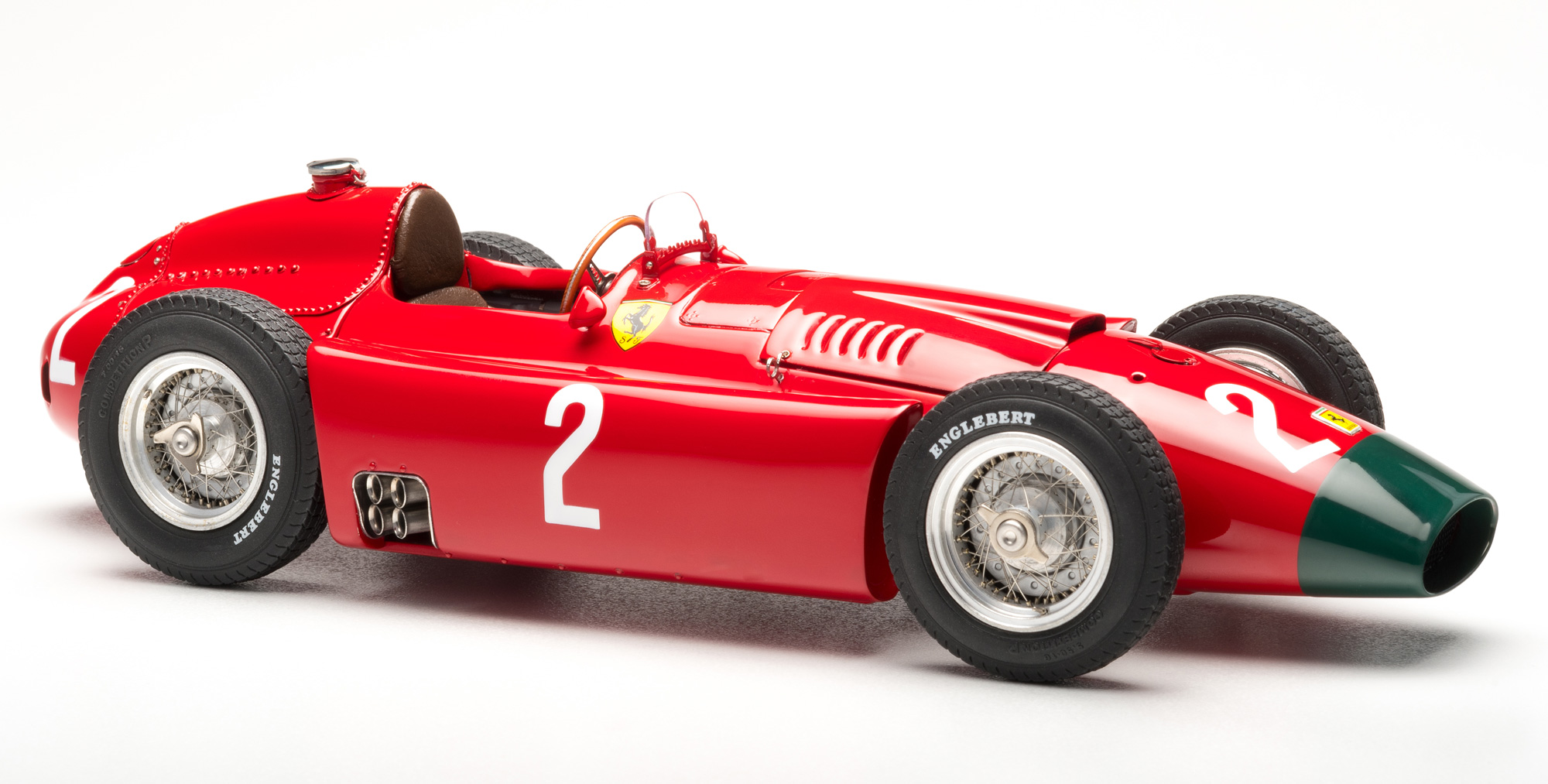 Lancia´s D50 project proved to be a worthy pursuit in the hands of Ferrari. Scuderia Ferrari had a highly successful season in the 1956 Formula One racing. It climaxed with Fangio becoming the World Drivers’ Champion for a fourth time. Both Collins and Fangio had raced in a long-nose D50 at the Nurburgring in the German Grand Prix. That was the only appearance that the long-nose D50 made during the 1956 F1 racing season.
CMC offers you a meticulously hand-crafted replica of the highest quality, which brings to life in miniature the longnose Ferrari D50.

As the seventh race of an eight-round contest for the 1956 World Championship, the German Grand Prix took place on August 5 at the Nürburgring. As the F1 season was coming close to a conclusion, Peter Collins was leading in the drivers’ standings with one point ahead of Juan Manuel Fangio, a teammate from Scuderia Ferrari. Over Jean Behra, who was racing for Maserati, Collins had a four-point lead. All three stood a chance of contending for the championship title, whereas Stirling Moss was already too far behind to win the title on his own.

Peter Collins, a young Brit, started off in a “long-nose” Ferrari, so did his team-mate Juan Manuel Fangio. The long nose not only gave the D50 a strikingly sleek appearance, but also improved its aerodynamics. A green strip that encircled the tip of Collins’ long-nose D50 helped the pit crew identify the car during the race from Fangio’s long-nose.

In the qualifying practice, Fangio won pole position by 0.3 seconds ahead of Collins. Castetlotti, another teammate from Scuderia Ferrari, took third place by 3 seconds behind. About ten seconds later, Maserati driver Stirling Moss managed to qualify for fourth place. The race lasted 22 laps. After the start-off, Collins took the lead, only to be surpassed by Fangio during the first lap. Fangio was able to maintain the lead until the very end of the race. An error committed in the heat of racing compelled Collins to retire prematurely. Only seven out of the nineteen racers crossed the finish line, and the top five winners were awarded championship points. This put Fangio
comfortably ahead of Stirling Moss, who came in second and crossed the finish line a few seconds ahead of his Maserati teammate Behra. In the drivers’ standings Collins lost the lead, but he was still in a position to stage a comeback in the last GP race and win the championship title.