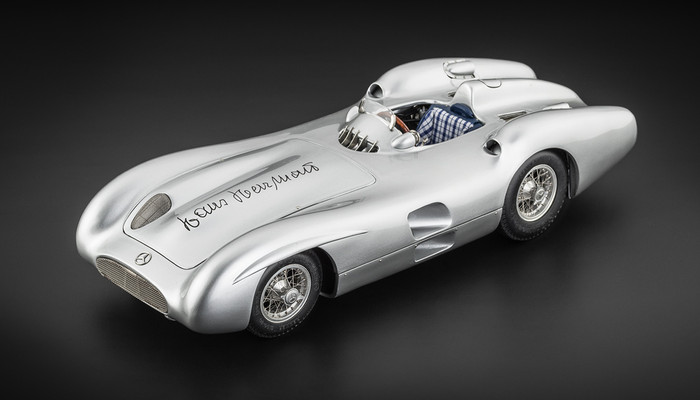 On July 4, 1954, over 300,000 eager motor racing fans descended on Reims in anticipation of the start of the 41st ACF Grand Prix. The race on the triangular circuit promised a feast of entertainment since, in addition to the Italian Ferraris and Maseratis and the French Gordinis, Mercedes-Benz was now also making a re-appearance for the first time since 1939. Three Silver Arrows with spectacular state-of-the-art streamlined bodies were to take on the opposition; the cars’ designers were convinced they would Prove more than capable of upholding the Mercedes tradition and continuing the legend of the Silver Arrows and their winning formula.

Sure enough, in what proved a sensational first outing, Mercedes driver Juan Manuel Fangio broke the 200 km/h mark on a European road circuit within the first hour of time trials to join Karl Kling on the front row of the starting grid alongside the 1953 World champion Alberto Ascari in a Maserati. The third member of the team, rookie Hans Herrmann, surprised even himself by taking the fifth position in the starting line-up, hemmed in on all sides by Ferraris and Maseratis. With 61 laps and 506.42 kilometers to cover, the starter’s flag got the race underway at 2:45 pm Fangio and Kling immediately took the lead and proceeded to hold on to it for the rest of the race. Ascari was forced to retire during the first Lap, and by lap seven Hans Herrmann had moved up to third place, recording the fastest lap of the day in the process. But he had perhaps demanded too much of his engine, which, given the time pressure the team was under, had undergone Less than thorough testing in preparation. His car finally gave up the ghost on lap 17.

To the delight of the German fans, the lead changed hands between between Fangio and Kling. In the end, it was Fangio who took the checkered flag just one hundredth of a second – less than a meter – ahead of his teammate. A one- And there were five more such double victories to come in the remaining races of the 1954/55 season, not to mention the four single wins and the sprinkling of second, third, and fourth places – in total, 10 wins from 13 Grand Prix races.

With the in-house designation W 196 R, Mercedes-Benz staged a comeback in an impressive style. To the general delight of the race-going public and press alike, new life had been breathed into the legend of the Silver Arrows.

Han Herrmann, born in 1928, was a trained pastry cook as well as a gifted racing driver. He painted the following picture of the early days of his career in motor racing.

“As a boy, I always wanted to be a racing driver, in the same way as other boys wanted to drive steam engines. So I became one. But before I was allowed to take it up I was told I had to learn a Proper job,” so I was trained as a pastry cook. But my passion for cars was already deep-rooted. My first fast car was a Porsche, with which I had some really fantastic wins. I suppose my best as a private driver was The class win at the 1953 Mille Miglia, and my first win as a works driver for Porsche at the Le Mans 24 Hours, where I won my class.

I answered it to find Neubauer, the Mercedes racing manager on the other end. He was calling to ask if I was interested in going to the Nübergrine to do some test driving. They were still looking for a third I was utterly speechless. But eventually, I was able to stammer a “yes, yes, yes!” Just two and a half years after my racing debut I had been handed a passport to Formula One.

I got my first experience of Mercedes’ new racing car early in 1954 on the Hockenheimring. It was a fantastic machine with great road-holding capabilities. And the best thing about it was its seemingly unlimited power. I had never experienced so much horsepower under The seat. Driving it was such a joy I even managed to go faster in practice than my teammate Karl Kling. It’s also to him I owe my life.

The story goes like this. There used to be a number of access roads to the surrounding fields at the old Hockenheimring. These roads were simply cordoned off with a wire to make sure that nobody got onto the circuit by mistake. Kling noticed this and had The wires removed so that – as he explained later – they didn’t block possible emergency exits or threaten to chop drivers’ heads off. I was once forced to use one of these emergency exits when an old hose burst during practice. I was unable To brake going into a bend because the brake pedal was covered in oil – quite apart from the burns to my leg!

Never mind, though. I was fit again in no time and able to join Fangio and Kling for the race at Reims – the first time the Silver Arrows had competed since the war. I managed to record the fastest lap there, before my brand new – though not fully tested – engine packed in. That was how my racing with Mercedes all started. Those were wonderful times.