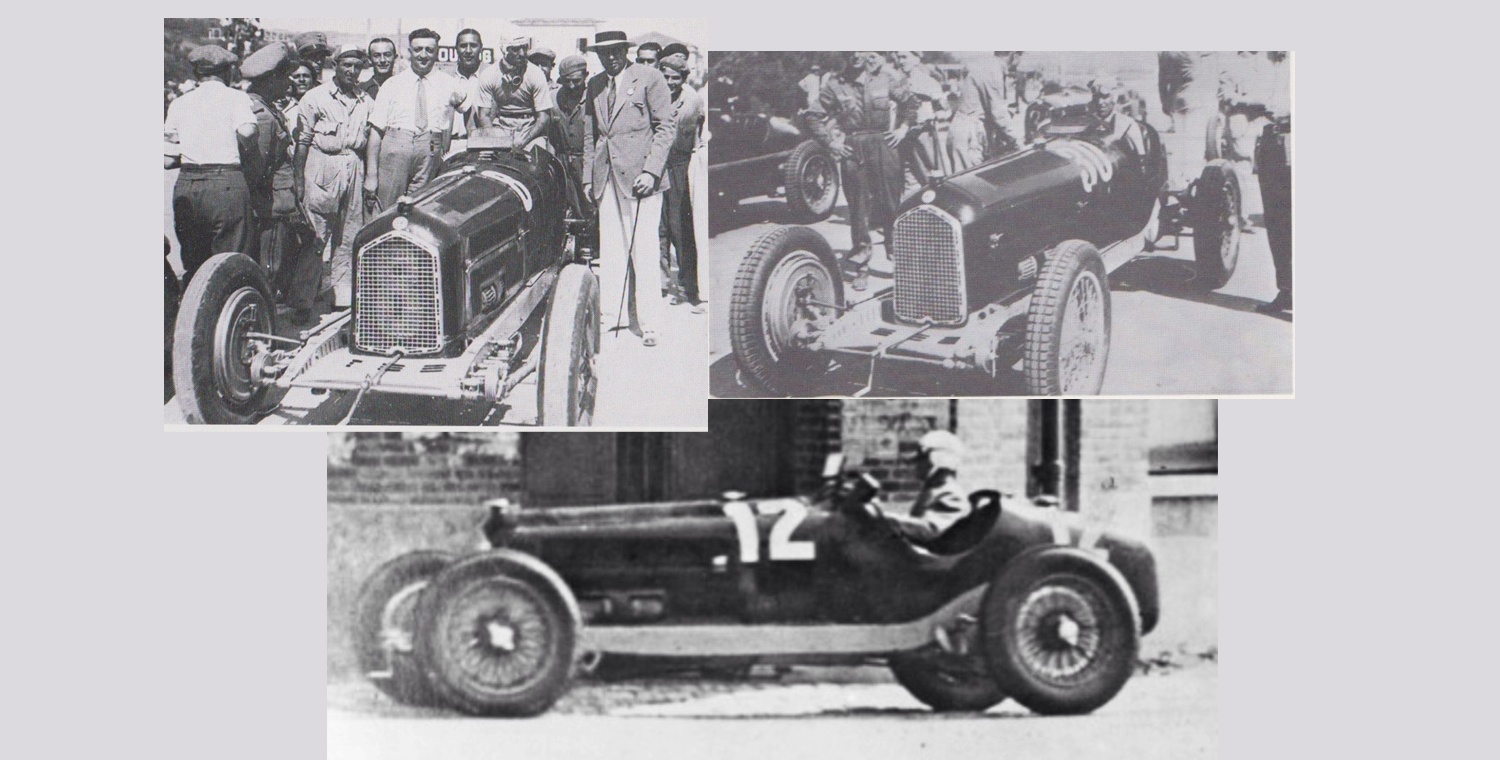 For the Winner-Set Tazio Nuvolari , we selected three different race cars of the type CMC Alfa-Romeo P3, with which the Alfa pilot Tazio Nuvolari competed sucessfully at the Grand Prix races in 1932.

Additionally this model-set will be delivered including a showcase and a figurine. The Winner-Set is only available as a complete-range.

This product is currently not available, but you can pre-order it here. When the product will become available, we will inform you by e-mail and you have to make the payment only then.
Request for item via Email or telephone: (852) 2186 9020
Item no. M-229 Categories: CMC Alfa Romeo, Models 1:18

The Alfa-Romeo Tipo B was a single-seater Grand Prix racing car built and raced by Alfa-Romeo between 1932 and 1936. Designed by Vittorio Jano, the car was based on the Alfa-Romeo 8C models. The P3 was Alfa-Romeo’s second single-seater after the Tipo-A monoposto of1931.It took over some components of the earlier very successful Alfa-Romeo P2, which led to the unofficial designation “P3” in the press and among motorsport enthusiasts. Thanks to the numerous victories achieved by Tazio Nuvolari and Achille Varzi, among others, it is considered one of the best competition cars ever built.

The chassis, with longitudinal spars and cross members in pressed steel C-sections, derived from that of the Tipo A, was adapted to the regulations and modified to accommodate the new engine. This version of the engine had a larger displacement of 2654 cc (bore × stroke: 65 × 100 mm) than the turbocharged inline eight-cylinder engine of the 8C 2300 “Monza”.It was advanced for its time, with a light-alloy cylinder block and head divided into two halves, each with four cylinders. Jano divided the block to reduce torsional vibration of the crankshaft and camshafts by placing all the power take-offs in the center of the crankshaft: driving the camshafts, on the side driving the supercharger fans, and opposite on the exhaust side driving the pumps for oil and cooling water. The crankcase was in one piece. The engine had dry sump lubrication, two Roots compressors and two Weber carburetors, magneto ignition and water cooling. It produced 215 hp at 5600 rpm.
The four-speed transmission and multi-plate clutch were interlocked with the engine.
Wheels were suspended front and rear on rigid axles with semi-elliptic leaf springs and friction shock absorbers, rear springs and dampers were double. The drum brakes were mechanically operated. A novelty of the Type B P3 was the placement of the differential immediately behind the manual transmission. From there, power was transmitted to the rear wheels via bevel gear pairs with two diagonally arranged shafts.The differential being located further forward reduced the unsprung masses and the load on the rear axle. This was intended to reduce the tendency to oversteer, and the driver’s seat could be mounted directly on the floor panel between these shafts in the interests of a low center of gravity.
This 700 kg single-seater with its simple, streamlined body reached 225 km/h.

In the very first race of the Tipo B/P3 on June 5, 1932, at the 10th Italian Grand Prix, Tazio Nuvolari won at Monza.The season continued with six more victories for Alfa-Romeo, including the most important Grands Prix of the time, namely those of France and Germany (at the Nürburgring). The second driver was the German Rudolf Caracciola.Thanks to these successes, Alfa-Romeo won the International Automobile Championship with Nuvolari, which in that year was based on the Grands Prix of Italy, France and Germany.

In 1933 the factory team “Alfa-Romeo” was closed due to the financial problems of Alfa-Romeo. Consequently, direct participation in competitions was suspended.All of Alfa-Romeo’s racing equipment was transferred to Scuderia Ferrari in Modena, which had prepared and fielded the race cars since 1929. That year, the Tipo B did not participate in the first 25 competitions and did not compete again until August.It won six of the remaining eleven races, including the Italian and Spanish Grands Prix.

Tazio Nuvolari (1892 – 1953) was born in Italy. He ran 172 recorded races, winning 64 times, placing second 16 times and third only 9 times[1]. Ferdinand Porsche called him “the greatest driver of the past, the present, and the future.” A resident of Mantua, he was nicknamed “The Flying Mantuan” and often addressed by the endearing “Nivola.”

1932 saw Nuvolari race an Alfa-Romeo P3 to win one major racing event after another. It was a time when Enzo Ferrari had no car company and Alfas were some of the fastest machines on the planet.  To understand old-world Alfas, you have to understand the kind of men who drove them, including Nuvolari in particular.

He was five-foot-five, a compactly-built man who didn’t start driving until 1920, at age 27. Over the next 30 years, he was pulled from the wreckage of a car or motorcycle 17 times, walking out of the hospital after each crash. He once won a motorcycle race after being lifted onto his bike by mechanics because he was encased in plaster.[2] His doctor walked away, saying, “You are a dead man if you fall, Nivola.” His face bore the scars of accidents.

By the way, Nuvolari’s lucky charm was a turtle. The writer Gabriele D’Annunzio gave it to him in 1932 as a token of admiration and had the dedication “For the fastest man, the slowest animal” engraved on the back of the golden brooch.

Nuvolari’s motto was simple: “Win, or break up the automobile.” That he didn’t die in the process but in bed is remarkable. In retrospect, racecar drivers tended to be driven by a single goal back then, which led them to adopt a devil-may-dare approach to engineering. A case in point was the gruesome death of Giuseppe Campari, an Alfa factory driver, at the 1933 Monza GP, who was racing in a car without brakes for weight reduction!

Nuvolari was arguably the most courageous racer to have ever lived. To Italy, he became an idol, a demigod, a legend, epitomizing all that young Italy aspired to be — do the impossible, not once but habitually. While Nuvolari spent his life dancing with death, what sealed his life was a stroke. It partially paralyzed him in 1952. The following year, he passed away.

In retrospect, Nuvolari joined the Alfa Romeo factory team in 1932 and started a winning streak of Grands Prix and major racing events for that season. This culminated in the ascent of himself as a driver and Alfa-Romeo as a car maker to the European Motorsport Championship. The Type B monoposto that he raced to victory each of these races was a tour de force, unofficially known as the P3.  CMC replicated the four winning P3s helmed by Nuvolari in 1932. They are available as an unlimited edition of the #8 replica from the Italian GP (M-219) and a limited edition of 300 sets in memory of Tazio Nuvolari (M-229). Each memorial set consists of three models — #12 winner of the French GP, #30 winner of the Coppa Ciano, and #8 winner of the Coppa Acerbo in addition to a display case and a racecar driver figurine.

April issue of Road and Track